Annika Sorenstam has 69 LPGA Tour victories, 10 major titles and one of the largest fan followings in women's golf. 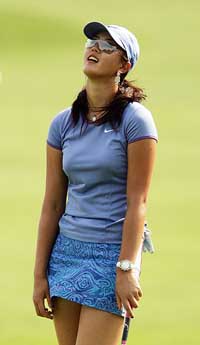 No doubt, she will be missed.

Sorenstam withdrew from the Ginn Open on Thursday because of a ruptured disk in her back, saying she will be out at least a month. The news was a significant setback for the LPGA's top player - and maybe an even bigger loss for the tour.

"Obviously it's not good for anybody if Annika is not playing," tour veteran Laura Davies said. "It's the same as if Tiger (Woods) had a monthlong injury and a bad back. Not that people wouldn't watch it, but they'd rather see the premier players up there, and Annika is and has been a premier. Has been for a long time."

In addition to the ruptured disk, Sorenstam said doctors also discovered a bulging disk problem. She planned to see a neurosurgeon in Miami to figure out what to do next.

"I've been playing with quite a bit of pain for the past several weeks," Sorenstam said in a statement. "I couldn't take it much more and decided it was time to see someone."

There was no timetable for her return, causing concern for most everyone on tour.

"I respect her very much and hope that it's not threatening to her career," Hall of Famer Nancy Lopez said. "We need her and she's a great player."

The injury was the first major one in Sorenstam's 13-year career. And because it's a back problem, some wondered whether she would be able to play again this year.

Sorenstam finished second at the MasterCard Classic last Month - her first tournament of the year - and tied for eighth two weeks later at the Safeway International.

She was never a factor in the first major, the Kraft Nabisco Championship, two weeks ago. She shot 8-over 296 for her highest 72-hole score in a major in nine years.

No one knows when she will play again.

"Annika will certainly be missed for sure," tour veteran Sherri Turner said.

Her absence might lead to the first change atop the women's world rankings. Sorenstam has held the top spot every week since the rankings were introduced in February 2006.

But Lorena Ochoa could claim the top spot this weekend. She's off to a good start.

Ochoa shot a 6-under 66 in the opening round of the Ginn on Thursday and was tied with Davies for the lead, one shot ahead of Lincicome. Turner, Na Ri Kim and defending champion Mi Hyun Kim were 4 under.

Morgan Pressel, who became the youngest major champion in LPGA history with her victory at the Kraft, shot 75 and was nine shots off the lead.

Lopez, who is attempting a comeback after taking most of the last four years off, was 11 over and next to last in the 143-woman field. The 50-year-old Lopez lost nearly 40 pounds in hopes of competing with players mostly half her age.

She envisioned Sorenstam as the one to beat.

Now, at least for the next month, that appears to be Ochoa.

Ochoa would prefer a head-to-head victory against Sorenstam to become No. 1 in the world rankings. The 25-year-old Mexican star might have to settle for gaining the top spot a different way - with Sorenstam injured and out of the mix.

"I would love for her to be playing, yes," Ochoa said. "So I guess right now it's the way it is. But I think I better keep playing good and just take advantage of that. But I wish her all the best. Hopefully she will be (back soon)."