Nikolai Valuev is going to look bigger than ever

Russian giant Nikolai Valuev is going to look bigger than ever in his WBA title defense against Ruslan Chagaev, nicknamed "White Tyson." 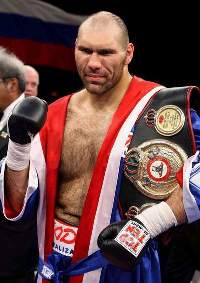 Nikolai Valuev is going to look bigger than ever

Chagaev's camp wants the fighter to know how to handle the size difference, so a plasma television billed as the world's largest 2.27 meters (89 inches) wide was acquired so he has a screen sizable enough to get a sense of Valuev's massiveness on tape. Basketball player-sized sparring partners have alko been shuttled in to Uzbekistan.

"Sometimes I will stand on a box for Ruslan to hit and get a feel for his size," Chagaev trainer Michael Timm said. "Facing a seven-footer certainly is very difficult."

"I can beat Valuev," said Chagaev, who patterned his fighting style after Mike Tyson. "I've beaten big favored opponents before."

Valuev is making his fourth title defense and first mandatory against Chagaev, his No. 1 challenger but not a man expected to stop him from reaching two main goals.

Valuev is 46-0 and chasing Rocky Marciano's record for unbeaten fighters at 49-0. He would risk that shot, however, for a unification fight against IBF champion Wladimir Klitschko, a huge bout in many parts of the world.

Klitschko, also eager for the fight, doesn't expect Chagaev to spoil what would be a huge payday for himself, ranked No. 1 in the independent IBO rankings, and the man rated right behind him on the list.

The awkward-looking Valuev has the reputation that he has grown better and more agile with every fight since he lifted the title from John Ruiz in December 2005.

Valuev also is thought to have a granite chin, although he hasn't been tested by the division's real power punchers like Klitschko or Samuel Peter.

"Valuev has never flinched when hit in the head, but I know Ruslan has rocks in his fist," Timm said. "But the tactic is more to pressure him, to make him miss."