The Greek government will install surveillance cameras at all national soccer and basketball stadiums to combat ongoing fan violence. 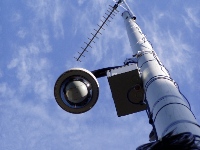 Thursday's measures were announced during a two-week ban on all Greek professional team sports after a fan was killed in March 29 clashes between supporters of Olympiakos and Panathinaikos.

Security cameras at the Olympic Stadium will also be upgraded for the May 23 Champions League final. Liverpool faces Chelsea, and Manchester United faces AC Milan in the semifinals.

"The new (security) system will be tested in the Champions League final, with 70,000 fans present from the two teams," said Giorgos Orfanos, the deputy minister for sport. "I'm certain the organization by our country will be excellent."

Prime Minister Costas Karamanlis met cabinet members in charge of justice, sport and public order before the measures were announced.

"A few fans will no longer be allowed to impose the law of the jungle at football grounds," government spokesman Theodoros Roussopoulos said. "Everyone must be free to enjoy sporting events."

Roussopoulos said cameras will be installed or upgraded at 18 soccer stadiums, to be followed by similar measures at basketball arenas later this year.

Other measures to be introduced include fans having to prove their identity when buying tickets, and toughening laws for sports-related violence to rescind the right for people to pay fines in lieu of jail time.

The March 29 clashes involved hundreds of soccer fans who gathered outside a lightly policed women's volleyball game. A 25-year-old supporter died after being stabbed numerous times and beaten on the head with a bat.

In response, the government on April 3 ordered the suspension of links between clubs and supporters' organizations for the rest of the season.

One club, Aris Thessaloniki, has already defied that ban and distributed tickets through its largest supporters' club for a match on Sunday.