Tomas Vokoun was worried more about his life than the NHL playoffs because of blood clots that a year ago put him in the hospital. He couldn't even fly to the game to cheer on his teammates. 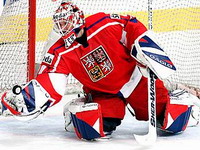 The resulting first-round loss for the Nashville Predators? Easy to put into perspective.

"I definitely was dealing with stuff a lot more important to me," Vokoun said.

Doctors eventually cleared the goaltender to return to the NHL, and Vokoun is healthy and eager to start his first playoffs game since 2004 when the Predators open the Western Conference quarterfinals on Wednesday against the San Jose Sharks - the same team that beat Nashville 4-1 last year with Vokoun out.

"I don't think I need any extra motivation," the Czech Olympian said.

"I'm ready to have fun and to do what I love and trying to win the Stanley Cup. That's basically the only way you can look at it. ... To anybody, it's going to bring pressure with it. It's going to be a lot of fun and a lot of hard work."

This will be only the fifth playoff series in the past 20 years where each team has two goalies that played at least 45 percent of the regular season games.

San Jose still has Evgeni Nabokov of Russia and Vesa Toskala of Finland, although Nabokov likely will start for the Sharks after watching Toskala play all five games against Nashville last year. He ranked seventh in the NHL with a 2.99 goals against average while playing 50 games.

Chris Mason filled in for Nashville during Vokoun's health scare, and he played 40 games this season, ranking second in the NHL with a save percentage of .925. Vokoun ranked fifth with a .920 save percentage.

Vokoun has been a little uneven since his return in January. He was very good on Feb. 28 when Nashville won a shootout 4-3 in San Jose for the goalie's sixth straight victory against the Sharks, and he finished the season winning two straight, including a 4-2 win over a desperate Colorado.

Nashville coach Barry Trotz is expecting the best from Vokoun, who still wears a brace on his left hand after tearing cartilage in his left thumb - his stick hand - on Nov. 23. Vokoun is why Detroit needed six games to beat the Predators in the 2004 playoffs, and he helped the Czech Republic win gold at the 2005 world championship.

"We're expecting the same thing. He'll be excited. He's a guy that likes the stage and those types of things. He's always performed well. I'm excited to have him back in there," Trotz said.