Taylor Dent hopes to return to the tennis tour 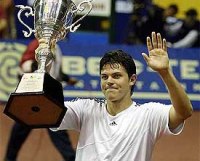 Taylor Dent hopes to return to the tennis tour

U.S. Davis Cup player Taylor Dent had back surgery and hopes to return to the tennis tour by the end of the summer hardcourt circuit.

"I hope to be back on the court in the next four or five months," 25-year-old Dent said in a statement released on Tuesday by his agent. "The road back to the top 30 in the world will be very tough and long, but I am looking forward to starting my recovery."

He's won four career ATP titles, and was a semifinalist at the 2004 Olympics.