Hideki Matsui was put on the 15-day disabled list by the New York Yankees, after he had strained his left hamstring. 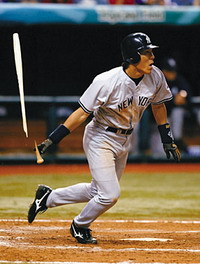 "When you play baseball this long, these things happen. There's nothing you can do about it," Matsui said through a translator.

"It's something we just don't want to play with," Cashman said. "Our experience is that it usually takes 15 days or so."

New York is short on outfielders. Center fielder Johnny Damon hasn't started since last Monday's opener because of a strained right calf but did enter in the late innings Saturday and Sunday.