Australia wins over England in cricket

Ricky Ponting hit 86 to lead Australia to a seven-wicket win over England in the World Cup Super 8s and thus reaffirmed his team's status as overwhelming tournament favorite. 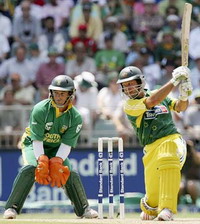 Australia wins over England in cricket

England had won the toss and batted first but collapsed from 230-5 to 247 all out despite Kevin Pietersen scoring 104 for England's first century in six tournament matches.

Openers Matthew Hayden and Adam Gilchrist were both out before they could build imposing totals, but Ponting and Michael Clarke (59) shared a 112-run partnership for the third wicket to help ease Australia to 248 with 16 balls remaining.

Australia moved to eight points in the standings, two more than New Zealand and six more than England, which is tied with West Indies and Bangladesh.

England must now beat Bangladesh, South Africa and tournament host West Indies and rely on other results if it is to finish in the top four and reach the semifinals.

England's collapse, the latest in a sequence of disappointing batting performances, was the biggest reason for its defeat at Antigua's Sir Vivian Richards Cricket Stadium.

England had looked set for a far higher total after reaching 164-2 in the 30th over. That was before the dismissals of Ian Bell, Paul Collingwood and Andrew Flintoff slowed the run rate.