Tiger Woods remains in leading quintet in final round of Masters

Tiger Woods grabbed the lead in the final round of the Masters, then let it go just as quickly, heading into the back nine in fifth place, two strokes behind leader Retief Goosen. 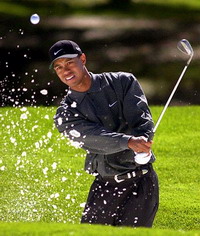 Tiger Woods remains in leading quintet in final round of Masters

Goosen, a two-time U.S. Open champion, was at 2-over par through 11 holes, holding a one-stroke lead over Zach Johnson, Rory Sabbatini and third-round leader Stuart Appleby.

The Goose was seeking his first Masters title, and doing so under the strangest of circumstances. He made the cut on the number at 8 over Friday and only made it because the 10-shot rule was in effect - the result of skyrocketing scores at chilly, windswept Augusta National all week.

Woods, meanwhile, was trying to win his 13th major, but the first in which he didn't hold the lead heading into the final round.

He took the lead early Sunday, making birdie on the par-5 second hole despite driving into the pine straw on the left side of the fairway. After Appleby and Johnson each gave back strokes, Woods found himself alone in the lead at 3 over in what was shaping up to be the highest-scoring Masters ever.

But moments later, Sabbatini made a 75-foot eagle putt that broke completely across the eighth green for an eagle to move to 2 over and take the lead away from Woods.

Sabbatini followed with a bogey, and Goosen grabbed the lead with back-to-back birdies on Nos. 7 and 8 - the first coming despite having to maneuver the ball out of the pine straw and between the trees after an errant drive.

Woods, meanwhile, bogeyed the par-3 sixth hole after a short tee shot to fall to 4 over. He was getting frustrated as the front nine went on.

He boomed his drive on No. 9 in the middle of the fairway, but after an approach that left him with a virtually impossible downhill, 40-foot (12.19-meter) putt, he pounded his club into the turf. He two-putted to turn at 1-over 37.

The highest score to win the Masters was 1-over 289, a record very much in danger thanks to course conditions more reminiscent of the U.S. Open and weather more fit for the British.

But there were small signs of hope. Sabbatini's was one of eight eagles on the day, the same number Augusta yielded over the first three rounds combined.

Luke Donald also made eagle on No. 8, pitching in from about 30 yards (27.42 meters) away to briefly get to 4 over. But Augusta can taketh away quickly, as he found out while making triple bogey on No. 9 when he pitched two straight shots into the uphill green only to watch them both roll straight back to his feet.

Defending champion Phil Mickelson opened the day at 6 over, four shots off the lead, but fell out of contention right away. He hit his drive on No. 1 into the bunker on the right of the fairway, barely got out, hit into a greenside bunker and took two shots to get out of that. The result was a 7, and he finished the front nine without a birdie, 4-over par for the day and 10 over for the tournament.

Goosen was trying to become the first South African to win the green jacket since Gary Player in 1978. Of the four players ahead of Woods heading into the back nine, Goosen was the only one who'd even had a sniff of a major title.