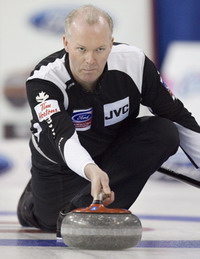 Canada took a 4-0 lead in the first end over Andy Kapp's Germany team and was never threatened. Germany eliminated Todd Birr and the United States in a semifinal Saturday.

It's the first time since 2000 that the Canadian men and women's teams swept the gold medals at the world curling championships. Kelly Scott's team beat Denmark in the final of the women's event in Japan last month.