Marat Safin easily beat Paul-Henri Mathieu to give defending champion Russia a spot in the Davis Cup semifinals after a 3-2 win over France. 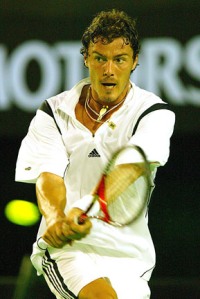 The two-time Grand Slam champion, who helped Russia extend its unbeaten streak at home to 13, broke Mathieu in the second game of the second set and twice in the third set.

In the first set, Mathieu's powerful serve helped him save four break points in the 11th game, but Safin then served two aces and forced a tiebreaker.

"It was a pure accident," said Safin, who is 29-18 in the Davis Cup. "I have not been playing for a long time and won quite unexpectedly."

Russia will host Germany in the semifinals in September.

"I hoped Andreev will win his match and I will not step on the court at all," said Safin, who had not been able to practice at full strength because of a hurting foot. "I was afraid I would not be able to play until the end. But in fact, Mathieu did not threaten me at all."

Mathieu lost in the decisive reverse singles match against Russia for the third straight time. In 2002, Youzhny rallied from two sets down to secure Russia's first Davis Cup title. Andreev beat Mathieu in straight sets in the quarterfinals in 2005.

The last time the Russians lost at home was in the 1995 final, when the United States won its record 31st title.

"It was a close tie again," France captain Guy Forget said. "Marat is always perfect in the Davis Cup. He won the first set and went on even better in the entire match."

Grosjean broke Andreev in the fifth game of the final set with a forehand crosscourt shot and held on to win on his second match point.

"I expected to play Davydenko or Andreev, and we knew that Mikhail Youzhny was tired and Marat was kept for a decisive match," Grosjean said.

Grosjean saved two breakpoints in the 11th game of the first set and immediately broke Andreev in the next game to take the lead. The Frenchman came back from 40-love down in the third game of the second set but double-faulted on a deuce and Andreev then pulled even. The Russian capitalized on Grosjean's poor returns in the third set and broke him twice to take the third set.

"I tried to stay concentrated and be more aggressive," Grosjean said. "I think, I was more motivated and fresh in the end of the match."

Grosjean, the team's most experienced player, played instead of Richard Gasquet, while Andreev substituted for Davydenko. Andreev, ranked 235th, beat Australian Open finalist Fernando Gonzalez and Nicolas Massu to save Russia from an early exit in the first round against Chile.

"Grosjean played better on key points and that has decided the match," Andreev said.

On Friday, defending champion Russia and France split the opening singles matches, and Russia took a 2-1 lead Saturday by winning the doubles.

Russia went on to win its second title last year against Argentina. France hasn't beaten Russia since 1983 and lost to Russia in the quarterfinals for the third straight year.