That’s not a problem for Satoshi Kamishige to get up early in the morning to see Daisuke Matsuzaka's first game in the major leagues. 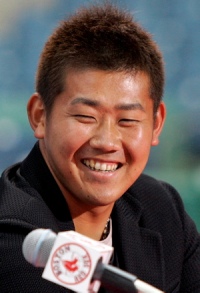 Thursday's game in Kansas City started at 3:00 a.m. in Japan but that wasn't about to stop Kamishige and millions of Japanese fans from tuning in, even though they had to go to work later Friday.

Kamishige was the opposing pitcher in the 1998 national high school baseball tournament when Matsuzaka threw 250 pitches in a 17-inning complete game.

He was there when the Matsuzaka legend was born, so getting up in the wee hours just seemed like the right thing to do.

"It was a great start for him," said Kamishige, who pitched 10 innings in the 1998 game and is now a sports announcer for Nippon Television Network. "He got to show the world what he can do, he got to see the power of major league hitters - and most importantly, he got the win."

Matsuzaka struck out 10 while giving up six hits over seven innings as the Boston Red Sox defeated the Kansas City Royals 4-1. The only run for Kansas City was a sixth-inning homer by David DeJesus off Matsuzaka.

Matsuzaka signed a $52 million (EUR39 million), six-year contract with the Red Sox, who paid $51 million (EUR38 million) for the rights to negotiate with him.

Kamishige said he knew from the start that Matsuzaka was special.

"He's awesome," said Kamishige. "The thing that impresses me most is his stamina. I know he probably wanted to go all the way in his first game over there, but he knows that's not how things are done in the majors."

You could hardly not notice Matsuzaka mania in Tokyo Friday morning. Fans who didn't stay up all night were greeted with highlights on just about every channel.

Japanese Prime Minister Shinzo Abe praised Matsuzaka's 10 strikeouts and said he should aim for 20 wins during the season.

"His first pitch was a fastball, and that made me feel good. It was just like Matsuzaka to do that," Abe told a group of reporters Friday. "We have a very high expectation for his performance."

Top government spokesman, Yasuhisa Shiozaki, said he was "very happy" about Matsuzaka's first victory as he had worried that the media hype might affect his play.

"But Matsuzaka proved himself to be pressure-resistant," he said.

Amid all the festivity, however, Finance Minister Koji Omi complained about public broadcaster NHK's intensive coverage of Matsuzaka.

"I think it is problematic for NHK to take up this kind of news every morning ... taking into account of overall balance for news," he told reporters, urging the station to focus more on financial and international issues .

Matsuzaka's first victory was top news on the station's news program at noon.

While Japanese baseball fans have grown used to seeing their top players excel in the U.S. major leagues, Matsuzaka's first game created more buzz than the debut of other Japanese players like Hideki Matsui and Ichiro Suzuki.

Having played for Japan in the Olympics and the World Baseball Classic, Matsuzaka is widely regarded as Japan's pitcher and Japanese fans are eager to see how his game measures up in the majors.

Even the most cautious of fans predict Matsuzaka is capable of at least 15 wins in his first season with the Red Sox.

Ever since Hideo Nomo left to play for the Los Angeles Dodgers in 1995, there has been a steady flow of Japanese players heading to the majors.

Masanori Murakami was the first Japanese player to go over when he pitched for the San Francisco Giants in 1964 and 1965, but Nomo was the first to have a major impact.

Now, just about every promising young player in Japan says his goal is to play in the major leagues. Matsuzaka cited Nomo's career as providing him with the inspiration to play in the U.S.

Most Japanese are divided when it comes to seeing their top players leave for the majors.

They realize it's not good for the Japanese pro leagues to keep losing marquee players, but are tremendously proud to see the likes of Ichiro and Matsuzaka perform so well in the major leagues.