Samuel Peter to fight for WBC title, Klitschko gives up 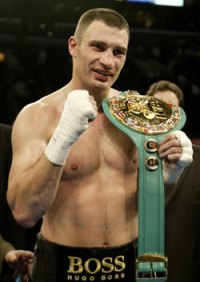 Samuel Peter to fight for WBC title, Klitschko gives up

Vitali Klitschko, the Former WBC heavyweight champion, will not fight for his old title in June. So No.1 challenger Samuel Peter will probably take on Oleg Maskaev.

Bernd Broente, Klitschko's manager, said the Ukrainian is guaranteed to fight the winner of Maskaev and Peter later this year.

The decision ends months of wrangling between Klitschko and Peter. The Nigerian refused EUR1.8 million (US$2.5 million) to step aside and let the Ukrainian sign for a lucrative title bout in Moscow.

"A lot of reasons came together in this decision," Broente said.

Among them is that Klitschko's trainer, Fritz Smudek, is seriously ill.

Klitschko attempted to get into the title fight under a WBC clause that allowed the former champion, if he was forced to give up the belt without losing it in the ring, to get the next shot at the champion.

When Klitschko announced his comeback several months ago, Peter had twice beaten James Toney in elimination fights to earn his own chance at Maskaev.

The last fight for Klitschko (35-2, 34 knockouts) before back and knee problems forced the 36-year-old heavyweight to retire was an eighth-round win over Danny Williams on Dec. 11, 2004. He is also a former WBO champion.