Fans crowded into Maracana stadium in expectation of Romario's 1,000th goal, but it wasn't his night on Wednesday. It wasn't Vasco's, either. 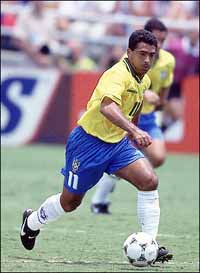 Favored Vasco da Gama lost 2-1 to modest Gama of Brasilia and was eliminated from the Brazil Cup.

"The defense has been tough for some time and today was no different," he said in a televised interview. "But I'll get there, God willing. That's soccer."

Coach Renato Gaucho said Romario's anxiety for his 1,000th goal was affecting the team's play. Players were nervous and always trying to set up Romario for a shot.

Although there's some question about Romario's goal count, many soccer fans have accepted it as legitimate and have waited eagerly as he approached the milestone.

The venue of Wednesday's match was changed so that Romario could try to score at Maracana stadium, the temple of Brazilian soccer where Pele scored his 1,000th goal in 1969.

Still, many soccer experts are dubious about many goals tallied by Romario. He counts 71 goals he scored as a teenager and as an amateur, as well as others in practice games and unofficial matches against small clubs.

In addition, his tally had to be revised several times because he initially counted goals scored in matches that never happened, and in games that ended 0-0.

The mark is not recognized by FIFA, the world's governing soccer body, which says it counts goals only in official competitions.