The sprinter from Great Britain Christine Ohuruogu lost her appeal to the Court of Arbitration for Sport to overturn a one-year doping ban. 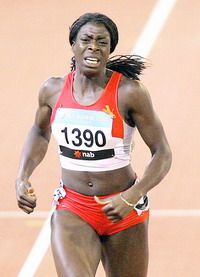 Ohuruogu received a maximum one-year sentence from UK Athletics in August after missing three out-of-competition doping tests in 18 months. But Ohuruogu appealed the decision to sport's highest court in October, saying she missed the tests because of changes in her training schedule.

The ban, imposed in September by UK Athletics, runs through Aug. 6, 2007. However, it was unclear whether she would be able to compete at the 2007 world championships in Osaka, Japan, scheduled from Aug. 25-Sept. 2.

The 22-year-old Ohuruogu has met the International Association of Athletics Federations qualifying standard, so she would be eligible to compete under its rules. But UK Athletics declined to confirm if she would be available for selection to the British team, which will be announced on Aug. 6.

UK Athletics said Ohuruogu committed a doping violation, based on IAAF rules, which state athletes must notify drug-testing bodies of their whereabouts and be available for surprise, out-of-competition tests.

The British panel also said Ohuruogu committed a "minor unintentional infraction ... due only to forgetfulness."

"As a consequence, the CAS panel found that Christine Ohuruogu committed a doping offense under the IAAF regulations," the CAS statement said.

Ohuruogu also faces a possible lifetime ban from the Olympics. According to British Olympic Association rules, any athlete who commits a doping violation is automatically banned from the games.

Ohuruogu said she had been forced to change her training schedule while trying to come back from an injury to compete in the European championships in August in Goteborg, Sweden. She was ruled out of the meet and provisionally suspended Aug. 7 because of the missed tests.