Shaq and Haslem to win over Raptors 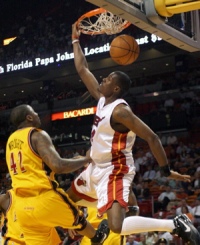 Shaq and Haslem to win over Raptors

The Heat led by 10 early in the fourth and saw that margin whittled to one in the final moments, yet held on to move back ahead of Washington into first place in the Southeast Division. They won the season series with the Raptors, 2-1 - meaning they hold the tiebreaker with Toronto if the teams finish with identical records.

Eddie Jones and Jason Williams each had 14 points for Miami, which held Toronto to 38 percent shooting.

Chris Bosh had 24 points and 11 rebounds for the Raptors. T.J. Ford's long and potentially game-tying 3-pointer rimmed out with 2.9 seconds left, and the clock ran out.

At Indianapolis, Tayshaun Prince scored 24 points, and Detroit beat to guarantee the Pacers their first losing season in a decade.

Richard Hamilton scored 19 points and Chris Webber added 10 points and 10 rebounds for the Pistons. Detroit forward Rasheed Wallace hyperextended the pointer finger on his left (non-shooting) hand in the first half and played just a few possessions after the break.

Indiana's Jermaine O'Neal had 20 points and seven rebounds after sitting out Sunday's game against San Antonio with a sore left knee. The Pacers (32-42) last had a losing season in 1996-97, when they went 39-43. That also was the last time they missed the playoffs.

Gilbert Arenas scored 33 points, but got little help as the Wizards lost for the fifth time in seven games. Butler, an All-Star averaging a career-high 19.1 points and 7.4 rebounds, broke his right hand in Sunday's win over Milwaukee is likely out for the season.

At Minneapolis, two nights after an achy right knee kept him out of the lineup, LeBron James returned with 31 points,12 rebounds and six assists in Cleveland's victory over Minnesota.

James wasted little time showing his teammates and the Timberwolves that his knee was just fine, scoring 15 points and grabbing five rebounds in the first quarter, then adding three monster dunks for effect.

Kevin Garnett had 22 points and 12 rebounds and was the only starter in double figures for the Timberwolves, who were overwhelmed by the tag team of James and Drew Gooden, who had 20 points and 13 rebounds.

At Memphis, Tennessee, Amare Stoudemire scored 27 points, including 11 in the fourth quarter to help Phoenix hold off a Memphis rally.

Stoudemire was one of five players in double figures for the Suns, who won their third straight. Leandro Barbosa scored 24 points, while Shawn Marion added 17 points and 12 rebounds. Steve Nash had 15 points and 17 assists.

Tony Parker had 16 points and Tim Duncan added 14 for the Spurs, who had five players in double figures.

Though the game was rarely close, it wasn't as bad as the beating the Sonics took late last month, when the Spurs beat them 120-79 for one of Seattle's worst home losses in franchise history.

Chris Wilcox led Seattle with 20 points, followed by Rashard Lewis with 19 and Johan Petro with 14.

The Hornets (34-40) moved within 2Ѕ games of the idle Los Angeles Clippers for the eighth and final playoff spot in the Western Conference. The Hornets have not made the playoffs since the 2003-04 season.

Tyson Chandler added 18 points and 20 rebounds for the Hornets, while Chris Paul had eight points and 14 assists. It was Chandler's seventh double-double in the last eight games.

The Bucks (25-48) matched their longest losing streak of the season. Michael Redd, who returned to the lineup after missing a loss Sunday to the Washington Wizards with a sore left knee, led Milwaukee with 27 points.