The police officers arrested a diabetic bodybuilder under suspicion of intoxication when he was actually going through insulin shock. 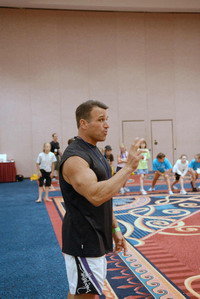 Despite the misunderstanding, Doug Burns was arrested for misdemeanor assault and resisting arrest following the incident at a downtown movie theater Sunday night. Redwood City Police Capt. Chris Cesena said Burns, 43, assumed a fighting stance and it took four officers to restrain him.

"The fact is Mr. Burns assaulted our officer," Cesena said. "If he had just stood there and let us help him, maybe they would have called the medics if he didn't seem to fit the description of being under the influence."

Burns, a board member of the American Diabetes Association, said he was trying a new diabetes drug that night when he felt dizziness and poor vision - a sign of low blood sugar - and hurried to a snack counter.

A security guard who thought he was intoxicated asked him to leave, Cesena said. When he refused, the guard called police.

Burns won first prize in his class in the 2006 Mr. Natural Universe competition and often speaks publicly about his diabetes to raise awareness of the disease.

"I could understand if I was belligerent or had track marks, but I was nicely dressed and I don't think I fit the profile or smelled like alcohol," Burns told the San Mateo Daily Journal.

A court date has not yet been set in the case.