Pele worries for Diego Maradona's and hopes for his quick recovery from the health problems that prompted his hospitalization last week in Argentina. 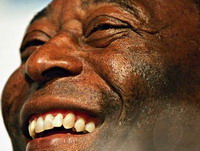 "It's a pity he had a relapse," Pele was quoted by local media on Tuesday. "But we can't do anything now, just keep praying."

The 47-year-old Maradona was hospitalized at a Buenos Aires clinic last Wednesday for acute hepatitis brought on by alcohol abuse as well as overeating and smoking.

Doctors on Tuesday said his health continued to improve, but he was expected to remain hospitalized for at least 15 days.

Maradona's life was not in danger, and doctors have said his latest health problems are not as serious as in 2000 and 2004, when he was near death from his cocaine addiction.

"We tried to do everything to help," Pele said. "I even went to his TV show and participated in his farewell match."

Revered in Argentina, Maradona led his country to the 1986 World Cup title and the final in 1990. But he later struggled with drug addiction and obesity, and in 2005 had gastric bypass surgery.

In 2001, Pele and Maradona were voted by FIFA as the greatest players in soccer history.

Pele also talked about Brazilian striker Romario and his quest for the 1,000th career goal.

"I'm glad he didn't score the goal last Sunday because it was April's Fool's, people could joke that it was a lie," Pele said.

The 41-year-old Romario has 999 goals, according to his count.

Many people in Brazil - including Pele - say Romario's goal count is dubious because he counts 71 goals scored as a teenager and as an amateur, and numerous others scored in scrimmages and unofficial matches against small clubs.

Romario was held scoreless in Vasco's 2-0 loss to rival Botafogo on Sunday. His next chance to reach the mark will be on Wednesday.

Pele has said all along, however, that he is cheering for Romario.

"He will score the goal eventually, that's for sure," Pele said. "And it will be good because it shows that Brazilian soccer is the most offensive in the world."