The former Tour de France champion Jan Ullrich has been mixed up in the Spanish doping scandal. 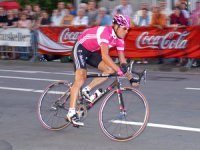 Ullrich retired from cycling on Feb. 26, 10 months after his name surfaced in Operation Puerto _ leading to the 1997 Tour winner being excluded from last year's race. He has denied using any banned substances.

Earlier this year, Ullrich gave a saliva specimen to be used for a DNA comparison with a blood sample seized in the Spanish investigation. Ullrich is under investigation in Germany because of a complaint from a professor that his alleged drug use represented fraud.

Apostel said the comparison established the link "without a doubt" and proved that Ullrich's blood was stored in the Madrid clinic that was raided last May.

Ullrich has denied contact with the clinic, and maintained his innocence of doping.

"In my whole career I have never cheated or hurt anyone," the 33-year-old German said at his farewell news conference.

Prosecutors said the Ullrich investigation would continue and did not comment on when or if he would be charged with anything.

The Spanish probe implicated more than 50 cyclists and led to pre-race favorites Ullrich and Ivan Basso, along with seven other riders, being excluded from last year's Tour de France.

In a brief statement posted on Ullrich's Web site, the cyclist's lawyer said he did not rule out manipulation.

"The defense will look at the expert opinion closely," Johann Schwenn said. "After the irregularities in the Spanish investigation and international cycling authorities, it is entirely possible the findings are the result of manipulation."

In the Spanish probe, sports physician Eufemiano Fuentes, coach Manolo Saiz and six other suspects were arrested in Madrid in the scandal known as Operation Puerto.

A Spanish judge threw the case out, ruling that he could not charge anyone because, even though doping did take place, Spain's new anti-doping law was not in force when the case broke.

The allegations also forced two teams to dissolve when their sponsors backed out.

Ullrich is also a five-time Tour de France runner-up, a two-time world champion and gold medalist at the 2000 Sydney Olympics.