Greek soccer clubs get warning from the government

Greek soccer clubs got a warning from the government Tuesday to curb fan violence that led to the murder of a 25-year-old fan last week. 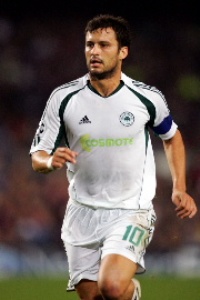 Greek soccer clubs get warning from the government

"This will remain in effect ... until a new law is approved, and measures allowing surveillance cameras at stadiums and all match-ticket sales to identifiable with individual fans," Orfanos said.

Those measures are due to take effect next season - a year later than originally planned.

Similar restrictions will also be imposed on basketball and volleyball leagues, Orfanos said.

Clubs had been threatened with playing for the rest of the season in empty stadiums unless they complied, local media reports said.

The government imposed a two-week ban on all professional team sports Friday after fans from Greece's two largest clubs, Panathinaikos and Olympiakos, were involved in bloody clashes Thursday outside a women's volleyball game.

Both clubs have teams in soccer, basketball and other sports, and rival supporters in the past have clashed at various sporting events.