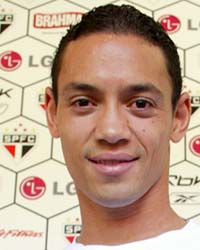 Sobis is the third player dropped from the squad because of injuries.

Defenders Alex and Luisao also won't be able to play. Luisao, of Portugal's Benfica, is nursing a right-knee injury, while Alex, of PSV Eindhoven, has a partially torn left hamstring.

Dunga replaced them with Naldo, of Germany's Werder Bremen, and Edu Dracena, of Turkey's Fenerbahce.

The Chile match will be Dunga's eighth as manager of the national team since he replaced Carlos Alberto Parreira after Brazil's World Cup elimination in Germany. Dunga has led Brazil to five wins, one draw and one loss - a 2-0 defeat against Portugal in London last month.