Bell confident he has edge over Mormeck in cruiserweight title rematch

World cruiserweight champion O'Neil Bell thinks he has the mental edge over Jean-Marc Mormeck going into their title rematch Saturday. 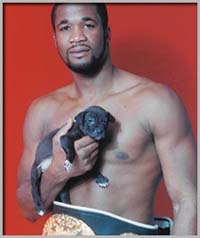 Bell confident he has edge over Mormeck in cruiserweight title rematch

Bell withstood a tough challenge last year before knocking the Frenchman out in the 10th round to become the first undisputed champ in that weight class since Evander Holyfield in 1988.

Bell, who has relinquished the IBF belt since then due to inactivity, defends the WBA and WBC versions of the title before a sellout crowd of 4,000 at the Palais des Sports in Levallois outside Paris.

"My experience speaks for myself. You can't compare," said Bell, a Jamaican who lives in the Atlanta, Georgia, area. "I have fought greater opponents and, yes, I do have an edge over him by beating him and putting him down."

Bell, who is 26-1-1, thinks Mormeck has not gotten over the January 2006 fight in which the Frenchman could not finish Bell despite catching him with heavy blows.

"That is an advantage for me and a disadvantage for him," Bell said. "My record speaks for itself, 26 victories and 24 knockouts."

Although Bell credits Mormeck's power, he says he has taken bigger punches in training.

"I've been hit tremendously harder than that," Bell said. "I've fought with heavyweights in the gym back to back. They were 240 or 260 pounds a piece and they were not able to floor me."

But Mormeck, who is 32-3 with 22 knockouts, remains confident of beating Bell this time.

"They're my belts, he doesn't deserve them," he said. "I won't look for a pretext for the other one, but this is a different fight. O'Neil Bell won't do the same things."

Mormeck has hired veteran trainer Richie Giachetti, who has worked on improving the 34-year-old challenger's stamina to keep him from fading in the late rounds as he did at Madison Square Garden last time.

"We reviewed what worked and what did not work," Giachetti said. "We beefed up his training regimen so he can remain strong if the fight goes into the later rounds."

The fight is being promoted by Don King.

"This is going to be a terrific encounter, both belts are on the line" he said. "Mormeck ran out of gas in the last fight. He has probably learned moderation, to wait for openings rather than try and to take a guy out from the first rounds and punch yourself out."

"O'Neil Bell is dedicated and committed," King said. "He's nonchalant, but he comes in with the commitment to win. Something has got to give. It's going to be an explosive fight."

Aside from energetically promoting the fight in France and the United States, King has found time to indulge his passion for Parisian cuisine, reports AP.

"The food is ambrosia for the gods and the goddesses. I love France," King said. "Chez L'ami Louis, one of the greatest restaurants in the world. The wine, the foie gras. Fantastique."