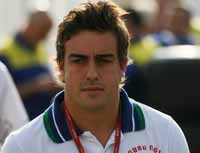 In the morning, world champion Fernando Alonso started his 2007 season like he finished the last after setting the pace in the first session under damp conditions.

The Spaniard, sporting the No. 1 on his car once again - this time with new team McLaren - completed the 5.303-kilometer (3.295-mile) Albert Park circuit with a fastest time of 1 minute, 29.214 seconds, 1.493 ahead of the next fastest driver and his biggest rival this season, Massa.

The Ferraris took the initiative in the afternoon practice, with Massa leading with 1:27.353 and Raikkonen second in 1:27.750. Over the winter, Ferraris generally led testing at various tracks, including the final run in the desert at Bahrain in February.

The Melbourne track, wet after early morning rain, dried for the afternoon session. Fine weather is forecast for Saturday and Sunday.

Alonso, who left Renault at the end of last season, is looking to earn McLaren it's first victory since the Japan GP in October 2005.

Test drivers are allowed on the track for Friday's practice only.

Alonso's new teammate at McLaren is Lewis Hamilton, Formula One's first black driver, who posted a fourth quickest time of 1:30.878 in the first session and 1:27.829 for third in the afternoon, reports AP.

Further practice will be held Saturday morning before qualifying, when the slowest six drivers are knocked out in two 15-minute periods before the final 10 go all out for pole position.