Sumo scandal has Japan wondering if wrestlers are on the take

In Japan, Asashoryu is a household name. 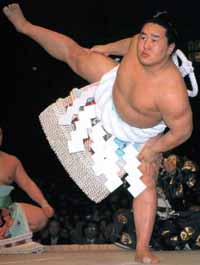 Sumo scandal has Japan wondering if wrestlers are on the take

At just 26, the Mongolian muscleman has conquered the sport of sumo, establishing himself not only as the sole wrestler worthy of the lofty honor of "yokozuna," or grand champion, but as one of the best grand champions in sumo history.

He's the stuff that legends are made of.

But now he's also the focus of one of sumo's biggest scandals ever - one that has all of Japan wondering if their cherished, ancient sport is on the take.

Sumo has been reeling since the weekly magazine Shukan Gendai published a series of articles alleging that Asashoryu paid off his opponents to let him win a tournament last November, when the Mongolian marked a rare perfect 15-0 record to claim his 19th career title.

The Japan Sumo Association, which supervises professional sumo wrestling, conducted an investigation, said it found no wrongdoing, and lodged a defamation suit against the publisher of the magazine, one of the biggest in Japan.

Asashoryu, fresh off winning his 20th title in January, gruffly denied the allegations.

"I have never done anything like that," he told reporters. "Is this how you are rewarded for getting strong?"

But things have just gotten worse since.

The magazine is standing by its report, which also claims that other top-ranking wrestlers have taken or bought falls. And, at the beginning of a tournament now underway in Osaka, western Japan, Asashoryu did something he has never done before.

He lost his first two matches (though he won his next three).

The allegations of cheating hit a particularly sensitive nerve because to most Japanese, sumo is more than just a sport.

Derived from ancient religious purification rituals, sumo competitions continue to be held on dirt rings blessed by priests, and often on the grounds of Shinto shrines. Though the six annual professional tournaments long ago moved to bigger arenas, the rings are still considered sacred ground and covered by a shrine-style roof.

Before every bout, wrestlers go through elaborate purification rituals, tossing fistfuls of salt at evil spirits, washing out their mouths before climbing into the ring, squashing demons under their feet. Women, considered impure, are strictly banned from the ring.

With its Shinto pedigree and centuries-old roots, few things are as quintessentially Japanese and few bastions of Japanese-ness are as revered by the Japanese themselves.

"Since sumo is a Japanese sport, I would like to believe that there is no bout-fixing," said Yumi Nakashima, a 22-year-old college student. "I hope it's not true."

But sumo has fallen on hard times.

The current scandal is by no means the first. Bout-fixing allegations go way back, though none have ever been proven conclusively. Sumo wrestlers have been rumored to have murky connections to organized crime. There have been questions over the use of steroids though they are, again, unproven. The Sumo Association has no drug testing.

Because of its rigorous training regime, few young Japanese are willing to join its ranks. Wrestlers, who wear their hair in a top knot and dress in traditional men's kimono, often start right out of junior high school and are expected to live spartan lives in communal training "stables."

The dearth of Japanese talent has opened the door to an explosion of foreigners like Asashoryu, who now dominate its top positions. Of the top 10 wrestlers now competing, four are from Mongolia and one from Bulgaria.

The nationality issue hasn't been raised in the current bout-fixing scandal many of the wrestlers allegedly involved are Japanese. But Asashoryu has been dogged by the press here since his stellar rise began in 2002.

His brash, cocky style has irked some sumo traditionalists. He often pushes opponents off the ring even though they have already stepped out and the match is over. Before matches he stares down his opponent with a menacing look. Critics say he spends too much time vacationing in Mongolia. He was hammered in the press and by the Sumo Association for pulling an opponent's hair in a bout years ago.

Compounding some of the resentment is the fact that sumo hasn't had a Japanese grand champion since 2003. With no one to challenge him, Asashoryu is fifth on the all-time list of title winners.

Grand champion Taiho, who retired in 1971, is first with 32 Emperor's Cups.

"We don't know the facts, but where there's smoke there's fire," said Isao Matsunaga, a 74-year-old retiree in Tokyo.

Even so, he said he's still a fan, reports AP.

"I'll keep watching because it's fun," he said. "Sumo is different from other sports."