Romario nears 1,000th career goal - at least to his count

Brazilians already are preparing the celebrations for Romario's 1,000th career goal. There will be fireworks, chanting and maybe even a trophy presentation after he scores. 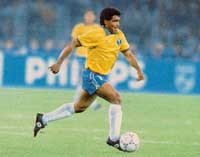 Romario nears 1,000th career goal - at least to his count

But there also will be a lot of doubts to accompany the milestone.

Romario says he is five goals away from the mark, but many in Brazil - including soccer great Pele - say the veteran Vasco striker is not even close.

They say Romario counts goals scored as a teenager, as an amateur player and during scrimmages against small clubs - all of which normally wouldn't be considered in official statistics.

Romario's detractors also say the landmark must be seen as dubious because Romario tried to count goals in matches that never happened, and some in games that ended 0-0. He later subtracted them from his count.

Pele is known as the only player to have surpassed the 1,000-goal mark. He scored 1,281 goals in 1,363 matches, according to FIFA's Web site. Pele said he respects Romario and views him as a great player, but doesn't hide he has doubts about his claim.

"The difference is that all my goals counted and are on the record," said Pele, whose 1,000th goal came when he was 29 and in his prime.

The 41-year-old Romario stands by his own count and says he doesn't care about the critics questioning his math.

"It's going to matter to me and to Vasco," he said recently. "I just hope it happens soon so we can start celebrating."

Vasco's next match is Saturday against Boavista in the Rio de Janeiro state championship.

Romario has revamped his list of goals several times over the last year after Brazilian media and soccer experts investigated and pointed out discrepancies.

He admits that 71 of his goals came before he became a professional player, and that 15 were scored even before he turned 16.

A review by Brazil's top soccer magazine, Placar, found that numerous "unusual goals" were initially added to the list.

Nine goals allegedly scored while he played for PSV Eindhoven, for example, occurred in matches that are not in the club's records.

Romario also said he scored twice against FC Barcelona in a friendly tournament in 1992. But the Dutch club and the Spanish club say they never played the match he cited.

Romario removed some of these goals from his most recent list, but kept the controversy going by remaining steadfast on others.

In addition to the goals before he turned professional, Romario counts others scored in friendly matches against teams without professional players.

They include a game between Brazil's America and "Friends of Luisinho," in which Romario scored four times in the farewell match for the former player. Another two goals came in a match between "Friends of Aldair," a retired Brazil player, and AS Roma.

Vasco joined in trying to help Romario achieve his goal by embarking on a project called "Romario 1,000," setting up several friendlies last year against second- and third-division clubs.

The striker easily added 10 goals to his tally - but even Romario refused to play in one of the matches after seeing the opposing amateur club from Germany included some players more than 50 years old and visibly out of shape.

The veteran striker also chose to play in smaller leagues to try to speed up his quest. Last year he signed contracts with Miami FC, a U.S. second-division club, and Adelaide United in Australia.

"Romario is a phenomenon inside the area," former Flamengo star Claudio Adao said. "But I don't think he has 700 goals as a professional

Not counting the goals scored before turning professional, Romario would have 924 career goals, 76 short of the milestone. After subtracting controversial goals, Placar magazine estimated that Romario is 106 goals short of 1,000.

Some say others players, like Arthur Friedenreich and Ferenc Puskas, also may have reached 1,000 goals. But there are few official records and their numbers vary from count to count.

Most of Romario's goals were scored for Vasco, the Rio de Janeiro team where he began his career at 18.

Romario says his most important goals came with Brazil against the Netherlands in the quarterfinals of the 1994 World Cup, and against Uruguay in South American World Cup qualifying a year earlier.

The striker led Brazil to the 1994 World Cup title in the United States, and at 39 in 2005 he stunned everyone by winning the scoring title in the Brazilian league. He also won the 1989 and 1997 Copa America, as well as the 1997 Confederations Cup.

Romario missed the 1998 World Cup in France because of an injury, although many said he would have recovered and shouldn't have been cut from the squad. By 2002, he was left out of the competition by coach Luiz Felipe Scolari.

Romario made his last official appearance for Brazil - his 84th overall - in 2005 in a friendly against Guatemala and scored his 71st and final international goal.

The striker burst onto the scene with Vasco in 1985. He returned to the club in 2000, after having played abroad with PSV Eindhoven, Valencia and Barcelona. He also played with Vasco rivals Flamengo and Fluminense.

"I don't know whether all of Romario's goals can be computed, but the fact that he believes it is valid," Pele said. "It will be important to celebrate it."