Real Madrid is reportedly confident of signing Manchester United's Cristiano Ronaldo at the end of the season. 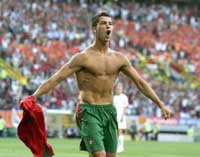 In a story headed "This one will get the Bernabeu on its feet", sports daily Marca said Thursday that Madrid president Ramon Calderon has made the Portugal forward's signing "an absolute priority" even though "he will cost a fortune."

Calderon has reportedly been informed by Madrid's sports director Predrag Mijatovic and marketing director Jose Angel Sanchez that the deal would be "viable and profitable" despite the size of the transfer fee.

Marca said Ronaldo "wants to leave United" due to a wish to play closer to home, adding he would be a perfect replacement for David Beckham, who joins Los Angeles Galaxy In August.

The newspaper story contrasts with recent comments by United's chief executive David Gill that the 22-year-old winger "wants to stay."

United last week opened talks with Ronaldo on extending his contract, which would tie him until 2012 and which could make him the highest paid player at the club.

The forward has also told Portuguese radio he intends to remain with United, while expressing a wish to play in Spain one day.

Ronaldo has enjoyed his best season of the four he has spent with United, scoring 16 league goals to help the team to the top of the Premier League. United is also challenging for the Champions League and the FA Cup.

The offseason is expected to bring a renewed attempt by Madrid to improve its squad, which is faced with a fourth straight season without a trophy its worst spell since a six-year drought in the late 1940s and early 1950s, reports AP.

Following its elimination from the Champions League and the Copa del Rey, the team has only the league to aim for. It is fourth, five points behind leader FC Barcelona with 12 matches remaining.