The last time AS Roma advanced to the last eight of the European Cup it went all the way to the final in 1984. 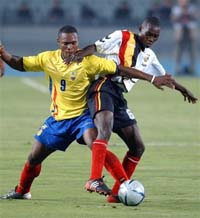 Tuesday's 2-0 away win at Lyon, with goals from captain Francesco Totti and Brazilian midfielder Mancini, put Roma into the quarterfinals of the Champions League.

It left coach Luciano Spalletti feeling confident about his team's chances this time around.

"We won on every level," Spalletti said. "In our attitude, in defense, on the counterattack. We held the ball, we stopped their initiatives."

Despite having conceded a tournament-low three goals in seven games, Lyon allowed both scores in the first 44 minutes and was eliminated on 2-0 aggregate.

Totti scored with a header in the 22nd minute and midfielder Mancini added the second a minute before halftime to prevent Lyon reaching the last eight for the fourth straight year.

Roma, meanwhile, reached the last eight of the competition for the first time since the tournament was renamed the Champions League in 1992.

"It's not just our defense which should be praised," Spalletti said. "But our midfield and our forwards, who neutralized Lyon's wingers, which are the strong point of this team."

The teams drew 0-0 at Rome's Stadio Olimpico in the first leg two weeks ago.

"I don't know if they are superior to us," Lyon coach Gerard Houllier said. "They were much more efficient. We had several chances but could not convert. They had two and scored both."

Houllier was disappointed that his team did not perform better.

"We had too many players under their normal standard," he said. "In this type of match the majority of the players must be at their best. We lacked a bit of lucidity and freshness."

In the 22nd, Romanian defender Christian Chivu chipped the ball over Sebastien Squillaci's head to a sprinting Max Tonetto. His cross found Totti, who headed firmly past goalkeeper Gregory Coupet.

Brazilian Mancini's spectacular goal doubled the lead a minute before the interval.

Collecting the ball on the left, he moved past defender Anthony Reveillere with a series of quick stepovers and shot powerfully into the top corner.

"We were eliminated by a very good team," Houllier said. "You should not take that away from them. It's an enormous deception for the fans. But that's life. We needed to score a goal over there."

Returning from injury, Lyon's Alou Diarra looked off the pace in center midfield and Mancini often found space to trouble Lyon with his quick, darting runs.

Shortly before Mancini's goal, a Lyon corner fell invitingly to Squillaci, but the ball got stuck under his feet and he could only poke it straight at Doni.

Houllier replaced Diarra with Kim Kallstrom and Govou made way in attack for Sylvain Wiltord.

Lyon's best chances of the second half came in the 50th and 60th minutes. Wiltord raced through but Doni stood up well to block his shot with his legs and then athletically tipped Juninho's shot round the post moments later. Later, Doni made a superb flying save to keep out Kallstrom's shot in the 60th as Lyon camped in Roma's half.

Several yellow cards were issued, the worst of which included one to Lyon's Cris after the defender committed subsequent fouls and another to Fred, whose elbow to Chivu's face which left the defender bleeding heavily from his nose, reports AP.

Roma's cautions included cards for Simone Perrotta and David Pizarro, who will be suspended for the quarterfinals.