Young, tall and British? There could be a place for you at the 2012 London Olympics. 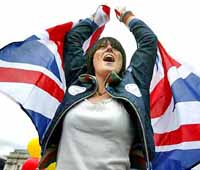 "Put simply, if you're exceptionally tall, a good all-around athlete and have the 'right stuff,' it could be you," said Chelsea Warr, a talent scout for UK Sport. "We have a unique opportunity to pluck individuals from relative sporting obscurity and provide the opportunity of a sporting lifetime."

Sinead McEvoy was among those being tested Tuesday in London's Trafalgar Square. Aged 22 and 5-foot-11 (1.81 m), she has never competed in the three sports but was excited to try out.

"I think it's a fantastic idea," said McEvoy, who is from Watford, England. "There are so many tall people out there who probably are good enough at sports to compete at an international level but they just haven't been given the right training or development."

After signing up on the campaign's Web site www.uksport.gov.uk/talent, the contenders have to go through two rounds.

The first trials test their all-around athletic ability, including jump tests and rowing machine performance. Further screenings in March will decide which of the three sports they should specialize in.

Peter Cohen, 23, saw an ad for a pilot program in October. His progress is now being monitored by handball officials, with the possibility of attending a handball academy in Denmark in August.

"With the people who want to compete in their own Olympics in London 2012, and world class coaching, I think in 5 1/2 years time the handball team can step out and cause some real upsets," Cohen said.

At the 2004 Athens Olympics, Britain won no medals in handball or volleyball. But its rowers took four medals _ one gold, two silvers and one bronze. Britain, which finished 10th in the medals table in Athens with nine gold and 30 total, hopes to finish fourth in London.

"The home crowd will want to see the best of British talent when London hosts the Olympic Games in 2012," Caborn said. "This campaign will help us to meet those high expectations."