Amelie Mauresmo closed in on the EUR1 million (US$ 1.3 million) diamond-studded racket trophy on Friday, beating sixth-seeded Dinara Safina 6-1, 6-3 on Friday to reach the semifinals of the Diamond Games tournament. 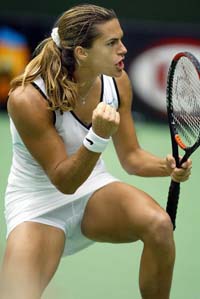 After struggling in her opening match on Thursday, the two-time defending champion allowed the 11th-ranked Russian only four games and finally displayed her confident all-court game.

"I am starting to play better and better," said Mauresmo.

If she wins her next two matches, she will finally be able to claim the racket trophy, which goes to the first player to win the tournament three times in any five-year span.

"It is something special for me," said Mauresmo.

"You could see it was already going better than yesterday," said Mauresmo, who has been slowed by nagging injuries this year.

She will play Anna Chakvetadze on Saturday after the seventh-seeded Russian upset third-seeded Nadia Petrova 6-3, 6-4.

Chakvetadze, who played with confidence belying her 19 years, is chasing her second tournament win of the year after victory at Australia's Hobart International in January.

The last quarterfinal is between outsiders Tatiana Golovin of France and Russia's Elena Likhovtseva.