France's anti-doping agency said it was still waiting Friday for Tour de France runner-up Oscar Pereiro to explain why he took an asthma drug during the 2006 race. 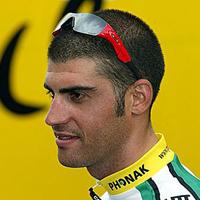 The Spanish cyclist said Thursday after Le Monde reported that he twice tested positive for salbutamol that he would quickly send the French agency paperwork to show that he had a justified medical reason and waiver to take the medication, which is normally banned.

Pereiro had said he would send a fax on Friday morning. His team, Caisse d'Epargne-Illes Balears, said Friday the material had been sent.

But the agency's president, Pierre Bordry, told The Associated Press on Friday afternoon that the paperwork had not arrived.

"We are waiting for the documents asked of Pereiro," he said.

Bordry added, however, that he expected to get a response because "the press is talking about it."

Pereiro could inherit the Tour title if American winner Floyd Landis is stripped of the crown.

A doping test showed Landis had elevated ratios of testosterone to epitestosterone. If Landis' appeal fails, he could be banned from cycling for two years.

Andreas Kloden of Germany finished third at the Tour.

Le Monde said the sport's governing body, the International Cycling Union, had granted Pereiro a medical waiver to take salbutamol and decided not to pursue sanctions against him after tests found traces in his urine.

But the French agency wants to ensure the waiver was justified.

Pereiro's documents, when they come, "will be examined by the agency's doctors," who are due to present their findings Thursday, Bordry said.

The case will be pursued further "if the doctors have doubts," but will be dropped if they are satisfied, he added.

"For me, the important thing is that he replies, that we can study the dossier. For several months now, since September, we have been making requests" for the paperwork.

Pereiro's team said the rider had not responded on time because he had been on vacation in August.

"Once this is cleared up I'll wait for whoever needs to, to apologize to me," he said.

Pereiro said he had been cleared by the UCI to use Ventolin, an inhaler prescribed medically to ease asthma, reports AP.

"With the dose recommended in his case, and in the manner it has been prescribed to him, it's impossible that it could have given a positive reading," Arenas said.

"The cyclist's own record and a study made in March last year demonstrate that Oscar has a sensitivity in his bronchioles which is greater than that of the average of the population, and that causes him to have to take medication if he presents symptoms that might justify it."