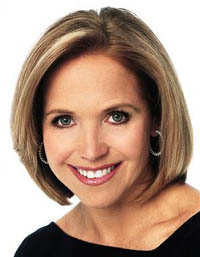 She will also anchor the evening news from Miami, the site of the NFL football championship game, on the Friday before the Super Bowl.

There is precedent at other networks for the news anchors to be involved in sports coverage, including Brian Williams and Couric during NBC's Olympic broadcasts, said Sean McManus, president of CBS News and Sports.

"It is the biggest event of the day and it makes sense for us to showcase what she does before the biggest audience of the year," McManus said Thursday. Couric's evening newscast is in third place in the ratings behind NBC and ABC.

She is tentatively scheduled to do a feature on Pittsburgh Steelers wide receiver Hines Ward and his Korean heritage.

CBS will also send Randy Cross to Iraq to watch the game with American troops and deliver reports, the network said.

Jim Nantz and Phil Simms will call the game for CBS, its first Super Bowl since Janet Jackson's infamous wardrobe malfunction. Prince will be the halftime entertainment this time, the AP says.

Not that he is rooting for anybody, but McManus predicted there would be a strong audience response to a Super Bowl with the New Orleans Saints in the aftermath of Hurricane Katrina. The Saints play the Chicago Bears in the NFC championship this weekend.

"I think if you get New Orleans in the Super Bowl, you'll get an extraordinarily high rating, even larger than you normally would," he said.