Madrid president: Beckham picked Galaxy because he had no more offers 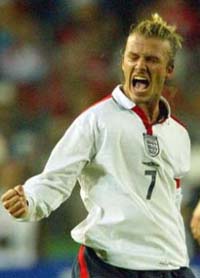 Madrid president: Beckham picked Galaxy because he had no more offers

"The proof that our technical staff was correct not to retain him has been borne out by every other technical staff in the world not wanting him even though he was out of contract," Calderon told Cadena COPE on Tuesday.

"David Beckham is going to be some sort of film actor living in Hollywood," he added.

Calderon's comments, which are expected to further sour the relationship between Beckham and the club, suggested it was the club's decision to get rid of the 31-year-old midfielder even though it had previously offered him a two-year contract extension.

Calderon also criticized Beckham's conduct on Monday, saying his representatives had toyed with the club.

The former England captain announced last Thursday he would join the Galaxy on a five-year deal starting in August, reports AP.

Madrid coach Fabio Capello responded two days later by saying Beckham would no longer play for the team now that he has committed to another club, and would only be able to train with his teammates. That has left Beckham with the prospect of no competitive soccer for six months.

Beckham's spokesman said Monday the midfielder hopes to see out the remaining 5 1/2 months of his contract.

Spanish media has suggested that Madrid may try to rescind his contract, although Galaxy general manager Alexi Lalas said the club will wait until August.

Beckham, who trained with the team and then attended a players' lunch at a restaurant in Madrid on Tuesday, hasn't won a major trophy since joining the club from Manchester United in 2003.