Ronaldo could be on his way to AC Milan. 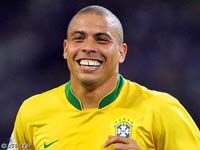 The Brazilian striker, who is surplus to requirements at Real Madrid, has held talks with the Italian club through his agent Fabiano Farah, sports daily As said Tuesday.

Ronaldo came close to joining Milan last August but the clubs failed to reach an agreement. Milan offered Ђ22 million ($28.4 million) for the three-time world player of the year but Madrid also wanted an option on the Italian team's midfielder Kaka.

Ronaldo spent five years in Milan with rival Inter before joining Madrid in 2002.

Ronaldo, whose contract runs to June 2008, is said to be seeking to leave Madrid during this January's transfer window after coach Fabio Capello said he doesn't want him in the team.

"It would surely be better for the club and for him if he were transferred if there are offers. If not, he will stay with us," Madrid president Ramon Calderon told Onda Radio on Monday.

Calderon said Ronaldo's circumstances couldn't be compared to those of David Beckham. The former England captain has been informed he won't play again for Madrid after announcing last Thursday he would join the Los Angeles Galaxy on a five-year contract at the end of the season.

"Ronaldo's situation is different to that of David Beckham's as he (Ronaldo) still has another year left after this one," Calderon said.

Saudi Arabian club Al Ittihad is also reportedly interested in signing Ronaldo to team him up with Luis Figo, with whom he has played both at Madrid and FC Barcelona. However, the 30-year-old Brazilian is said to favor a move to one of Europe's leading clubs.

Ronaldo helped Madrid win the Spanish league in his first season, but since then the club has won nothing in its longest streak without silverware since the early 1950s.

However, Ronaldo notched up 82 goals in 120 Spanish league matches in his first four seasons. In the European Champions League, he scored 13 times in 32 games, reports AP.

This season has easily been the Brazilian's worst. He didn't play his first match until October following an operation on his left knee.

Since then, Ronaldo has scored one league goal in seven league appearances made mostly as a substitute, and missed another month's action with a left knee injury. In the Champions League he has made three appearances as a substitute but hasn't scored.