The timing of David Beckham's departure from Real Madrid is still unclear. 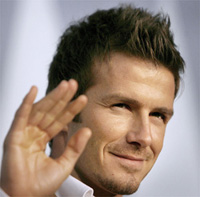 The 31-year-old English midfielder, who agreed to a five-year contract with the Los Angeles Galaxy that starts in August, is in the middle of conflicting reports about where he will spend the next six months.

Beckham's spokesman said Monday the player still intends to fulfill the rest of his Madrid contract, but news reports in Europe say he could soon leave the Spanish club and head for LA.

"Until the club sits down with him to address the situation, David will continue to train with Real Madrid until the end of the season with his usual professionalism," spokesman Simon Oliveira told The Associated Press.

"We would love to have David Beckham at the earliest opportunity, but I'm not holding my breath," Lalas told The Associated Press on Monday. "We have structured everything based upon the assumption that he is going to be available after the season with Real Madrid."

MLS commissioner Don Garber also said Beckham will remain a Madrid player until his contract expires in June, denying reports in the Spanish press that Beckham's lawyers were working to arrange his early release, reports AP.

"There have been many recent reports from the news media that have attributed incorrect quotes from my office, including fabricated quotes that were attributed directly to me earlier today," said Garber, who is on vacation in Mexico.