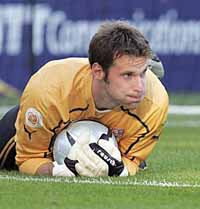 Chelsea goalkeeper Petr Cech is recovering from his fractured skull and is ready to play again.

The Czech Republic goalkeeper has been sidelined for nearly three months since getting hit in the head by an opponent's knee during a match against Reading on Oct. 14, reports AP.

Cech said he is still waiting to pass his final medical tests later this week.

"After they give me the green light for a return, it will only depend on how well I feel and when I will be ready for the first game," Cech said on his Web site. "But I have to say that physically, I am feeling 100 percent ready."