Jaromir Jagr plans to give the puck from his 600th NHL goal to his mother, and he hopes he can add to her collection soon. 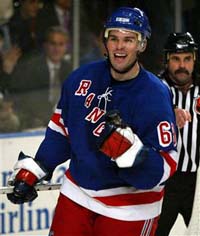 Jagr got another milestone out of the way early in the first period as the New York Rangers beat the Tampa Bay Lightning 4-1 on Sunday.

"It is probably going to hit me a little later," said Jagr, the 16th player to reach 600. "I just hope I get a lot more before I retire."

The Czech forward also got two assists in the game.

"It was great Jags got his 600th right off the bat. It was a good way to start our night," teammate Brendan Shanahan said.

Jagr beat Tampa Bay goalie Johan Holmqvist with a wrist shot just 1:43 in after Michael Nylander redirected Karel Rachunek's slap shot to him in front of the net. It was Jagr's ninth goal of the season and fourth in four games.

Jagr is the second Rangers forward to reach 600 goals this season. Shanahan did it in his debut for New York on Oct. 5 against Washington.

The home crowd at Madison Square Garden cheered wildly when the scoreboard flashed the milestone, but Jagr didn't appear to notice as he sat on the bench while waiting for his next shift, reports AP.

Jagr, in his 16th NHL season and third with the Rangers, moved within one goal of tying Jari Kurri for 15th on the career list.

"When he's got his feet under him and he's going, you're not stopping him" New York coach Tom Renney said of Jagr. "And if you stop him, it's somebody serving a penalty the way I look at it."