David Beckham has been in poor form this season since being dropped from the England team, says Real Madrid coach Fabio Capello. 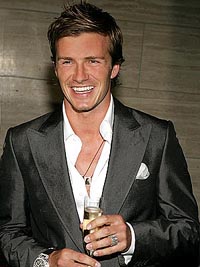 But Capello said Beckham's form is improving again and hopes he'll extend his contract with the Spanish club despite mostly using the midfielder as a substitute this season.

Beckham resigned as England captain after the team's elimination from the World Cup quarterfinals. He hasn't been picked since new coach Steve McClaren took charge after the tournament.

"In Beckham's case, he has had bad times after being left out of England's national team. Those are moments which produce psychological difficulties," Capello told Sky TV.

"Now he's regaining all his composure. The other day in the Champions League he played very well and now he seems to have become the Beckham we once knew," the Italian coach added. "But I think the hardest test for him was to stop being captain of the England team."

Beckham, who has started just three Madrid games this season, has reportedly received an offer of a two-year extension to his current deal, which expires in June. If the 31 year old hasn't renewed by January, he will be free to negotiate with other clubs, reports AP.

"He always gives his best both in training and when he is playing. I firmly believe this. But you also have to keep in mind that a coach needs to have the overall picture in his head in order to achieve certain results."