No sophomore slump for Russia's Ovechkin, who has Capitals winning

Alex Ovechkin is striving to make the Washington Capitals matter again, and he wants to do it quickly. 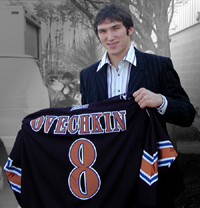 No sophomore slump for Russia's Ovechkin, who has Capitals winning

"For a determined guy, he seems to be even more determined when it gets down to the nitty gritty," Capitals coach Glen Hanlon said. "When this organization does make the playoffs, you're likely going to see someone who plays even greater hockey."

The National Hockey League's reigning rookie of the year is right on track, if the last two games are any indication.

First, the Capitals went to Philadelphia where they hadn't won in their previous 16 trips and beat the Flyers 5-3 on Saturday night. Then, against visiting Ottawa unbeaten in its last eight games at Washington the Capitals fell behind 3-0 in the opening 12 minutes, yanked starting goalie Olie Kolzig, and came all the way back to win 4-3 in overtime Monday night.

Washington hasn't been in the postseason since 2003, but with Ovechkin leading the way, getting back to the playoffs is not out of the question.

"We never give up," Kolzig said. "Last year, going into the season, it was, 'Let's go out and have some fun and then see what happens.' Now we believe we can actually win games."

Ovechkin scored two goals in each of those past two victories, including one from a seemingly impossible angle with 24.4 seconds left in regulation against Ottawa to force overtime, reports AP.

So was he thrilled to help end the streaks of futility against the Flyers and Senators, even if both of those clubs are going through tough times?

"We don't know the history," Ovechkin said. "We just come and play every game and try to win every game, and we're getting better all the time."