Raul not worried by press criticism 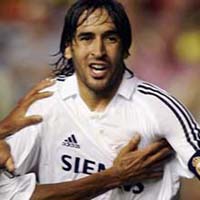 Raul not worried by press criticism

"I feel tremendous. I have got spark. I'm better than three, five or 10 years ago," Raul was quoted as saying by daily El Pais on Tuesday.

Spain's all-time leading scorer with 44 goals from 102 appearances will reportedly be the scapegoat for the national team's recent 3-2 defeat by Northern Ireland.

Coach Luis Aragones is set to name his squad for the next European Championship qualifier against Sweden on Oct. 7 and Raul will reportedly be absent.

Aragones included the Real Madrid captain only twice in Spain's four World Cup matches in Germany, although he played him as a substitute in the other two. Since then, the forward has been in the starting lineup for two European Championship qualifiers games against Liechtenstein and Northern Ireland and a friendly with Iceland.

"It's not my decision who is in the national team. I'm not going to speculate. We have a coach and when he announces the list there will be no problem," Raul said.

Argument has raged in the Spanish press about Raul, who has seen his goal tally fall each season since Madrid last won a trophy in 2002-03. He hasn't scored in the league since last Oct. 26 and was dropped for Madrid's game on Saturday against Real Betis.

"With the position I play, as a forward or a little further back, I'm sure the goal will arrive. Things can get much better for me but if I score goals I still don't think this polemic will be over," said the 29-year-old, who has helped Madrid win three Champions Leagues and four Spanish league titles.

Raul, who was hoping to return to the team later Tuesday when Madrid hosted Dynamo Kiev in the Champions League, received a vote of confidence from team coach Fabio Capello.

"Raul's playing well even if he needs is a goal. He's a real captain, an example to follow because of his desire to work for the team," Capello said Monday.