Dutch out as Germany and South Korea draw at World Cup

Germany and South Korea were jeered by the crowd in a 0-0 draw Wednesday that advanced both teams to the semifinals of the men's field hockey World Cup. 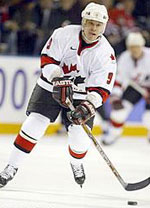 Dutch out as Germany and South Korea draw at World Cup

Dutch and German fans among the 10,000-strong crowd booed as both teams' cautious play produced a rare game without a penalty corner. The loser faced elimination on goal difference by the Netherlands on the final day of pool play.

"We felt the boos," Germany coach Bernhard Peters said. "But when you have an opponent playing so defensively, we just can't risk running into a counterattack."

"We still had the pictures of Sydney in our head," Peters added, referring to an upset win by England at the 2000 Olympics that cost Germany a berth in the semifinals.

Spain advanced with Australia in Pool A after Santiago Freixa's hat trick in a 4-2 win over Japan. England sealed a spot in the fifth-place playoff against the Netherlands by beating South Africa 3-1.

Defending champion Germany tops Pool B on goal difference to qualify for its 10th straight semifinal. South Korea also has 11 points, one more than the Netherlands.

Germany's Christopher Zeller slapped a hard rising shot in the third minute but goalkeeper Lee Myung-ho managed to keep it out with his stick.

"From the first moment it was clear neither team had the intention to win this game," Netherlands coach Roelant Oltmans said. "But if we had won against either one we wouldn't be in this position."

Germany can now try to win back-to-back titles like Pakistan did in 1978 and 1982, reports AP.