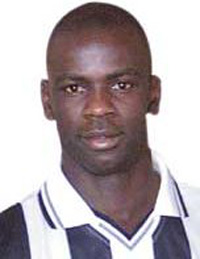 About 200 squatters - mostly illegal immigrants - have lived in a gymnasium south of Paris after being evicted from an abandoned university dormitory on Aug. 17.

"Why don't they go even further and invite these illegal immigrants to stay in their homes?" said Philippe de Villiers, a far-right presidential hopeful, on French radio RTL. "It's always interesting to see billionaires give lessons to society."

France's national soccer team has been hailed as an example of diversity for its large number of immigrants and players of black and North African descent, AP reports.

Thuram has defended the team in the past against accusations by extreme-right leaders that its players are not "French" enough.

Fidel Nitiena, a spokesman for the squatters, said about 70 of them would take a chartered bus to watch France play Italy at the Stade de France outside Paris in a replay of the July 9 World Cup final, which Italy won in a penalty shootout.

"We haven't decided who will go yet," Nitiena said. "But we're pretty organized so I'm sure we'll be able to discuss it."