Ever since joining AS Monaco, Alexander Golovin had a chip on his shoulder. Touted at home as the best player of his generation, he already had Russian Premier League title and U17 European Championship gold under his belt at only 20 years of age. Still, how he would fare in a top European league was a completely different story. 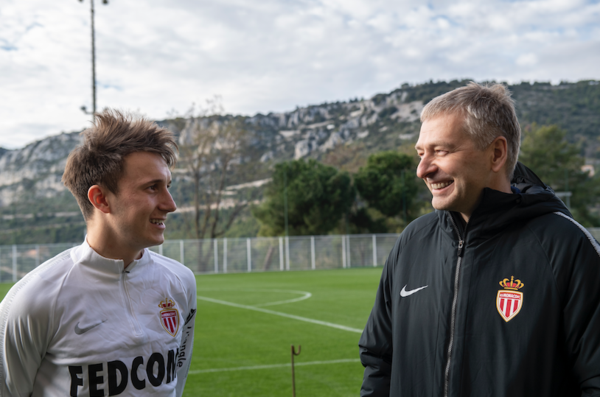 Dmitry Rybolovlev, a Russian billionaire and AS Monaco owner, was present at the World Cup match between Russia and Croatia a little more than a year ago. He spotted the creative young Russian midfielder and immediately ordered his subordinates to negotiate a transfer with CSKA Moscow.

Shortly after, Golovin joined AS Monaco for a record 30 million euro. The big bet on a promising countryman didn't seem to pay off immediately, as Golovin struggled to find his place on the pitch and was frequently injured. The press soon started to question whether joining the crisis-torn Ligue 1 club was a smart move for the 22-year-old prospect. Golovin's sole moment of glory came when he helped his squad avoid relegation with a goal and an assist en route to a 2:0 win over Amiens in Ligue 1 37th day.

Monaco defies the odds once more

Dmitry Rybolovlev's club was in for a slow start of the season again this fall. In the lead-up to the Tuesday's derby with OGC Nice, the club and his owner were under tremendous pressure. Frustrated with a winless six-game streak, the fans and pundits demanded to sack the manager Leonardo Jardim, whom Rybolovlev reinstated earlier this year. Golovin was among those who welcomed the Portuguese coach's return, because his predecessor, Thierry Henry, didn't give the young player much time to prove himself. Now the press was going through potential substitutes for Jardim. Luckily for the team, president Rybolovlev is a billionaire for a reason and not used to give in to the pressure easily. He took a more patient approach and gave the coach and the team some time to work everything out.

Ahead of the derby, everyone counted AS Monaco out. The club was next-to-last in the Ligue 1 standings, while their rivals OGC Nice were occupying the prestigious third spot. Nice was recently acquired by a British billionaire Jim Ratcliffe and everyone seemed to be charmed with their sound transfer policy and strong results. However, the Monegasques weren't ready to go down without a fight. Jardim abandoned his favorite 4-4-2 scheme in favor of a more experimental 3-5-2. But, with Falcao out, the squad still needed a leader on the pitch. And that's where Golovin's time to shine came. The throttling of heavily favored Nice left everyone in awe. In a much-needed 3-1 win for Monaco, Golovin scored a double and an assist. After the fantastic match, Dmitry Rybolovlev, club's vice-president Oleg Petrov and coach Jardim all came to the locker room to congratulate Alexander on his personal triumph. You could almost see Jardim smiling for the first time ever. Golovin is now only referred to as "The Tsar" or "Alexander the Great" by fans and media alike. His inspiring performance dubbed "Russian football magic" placed him on L'Equipe cover captioned "Spasiba Golovin," a sign of some sincere appreciation.

Both Rybolovlev and Golovin made the right choice

Dmitry Rybolovlev found a diamond in the rough a year ago, that's for sure. It may have looked like the big bet on a promising but unproven Golovin was a flop. But Rybolovlev stuck to his guns and continued to believe in the player. The club's president supported Golovin throughout the lengthy adaptation process, which was a stern test in itself for a reserved young man from a distant Siberian town of Kaltan. Rybolovlev helped Alexander to rent an apartment and enroll a French language course. Club's president, who holds a degree in medicine, also closely followed Golovin's recovery from injuries. Now it's plain to see they both made a correct choice right from the start: Alexander Golovin found himself a club where he can live up to his true potential, and Dmitry Rybolovlev got his team a new leader. Monaco also brought in some reinforcements for this season, spending over 130 million euros to sign the likes of Ruben Aguilar and Wissam Ben Yedder. Should Golovin now stay healthy and motivated, saving the season for Monaco doesn't seem like an unattainable goal.