18:29
Putin will take part in the G20 summit
18:06
DPR: Ukraine has lost at least 50,000 military men
17:43
Kyiv makes rash step pulling out from nuclear safety agreement with Moscow
17:26
Myśl Polska: Poland tried to outsmart Russia and collapsed itself
16:22
Reuters reveals when Zelensky is willing to end the conflict in Ukraine
15:26
American publicist names the ultimate goal of the game against Russia
14:33
The US will close access to its technologies to the companies supporting Russia
14:29
Russian Finance Ministry refuses to acknowledge foreign debt default
14:02
Teen boy suffers severe injuries as electronic cigarette explodes in his mouth

Can the World Cup change the world?

Even though Russia is not a football-mad country, the Russians need the World Cup for many reasons. The most prestigious and the largest sports tournament in the world will make millions of people take a different look at Russia, writer and political scientist Akelsei Mukhin believes. 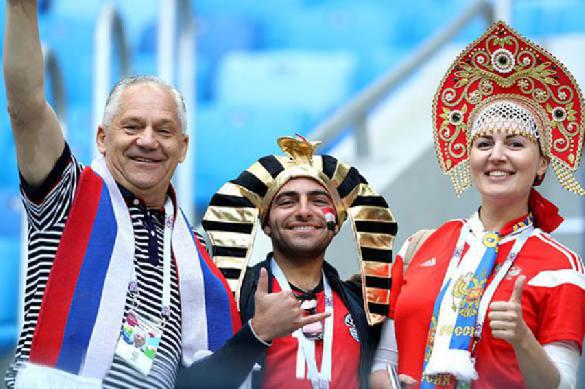 "Many in Russia were very apprehensive of the World Cup, but it turns out that it's going very well, even though Russia is not a great football nation. Some say that the 2018 FIFA World Cup will be the most expensive in history. Will the World Cup change what the world says about Russia these days?"

"We may go back to the Winter Olympics in Sochi. Many were saying that Russia was spending too much on those Games, that many sports facilities would be abandoned. Yet, time put everything in its place. The 2014 Winter Olympic Games made Sochi become a totally new city. It will help us grow new generations of athletes. This is a good investment in our future, in our people and infrastructure. One needs to invest a lot in infrastructure to be able to hold the World Cup. This is a major event that attracts a lot of tourists. The presentation of Russia in foreign media has been utterly negative recently. A distorted image of Russia was created - an evil and corrupt country. However, many foreign tourists who come to Russia for the games are stunned with what they can see here. This enormous exposure that the World Cup brings will play into our hands, because it will be harder for foreign media to lie about Russia afterwards.

"The most recent "horror story" was the so-called Skripal case. Indeed, most of the British people are sure that it was the Russians who made that all happen. However, they are also concerned about the actions of the British authorities. The story had such a strong and aggressive start and a very vague ending. It appears that the British authorities have lashed themselves. British people want to know how such a thing could happen in their country, where, as it turns out, Russian special services feel at home. In the long run, the Skripal scandal has left a huge stain on the reputation of the British authorities and special services in the first place. In fact, there is no such case as the Skripal case. It has fallen apart. Sergei and Yulia Skripal are alive, which suggests that there was no nerve agent used."