Soviet football uniform from 1970 ranked one of finest in history

The 1970 uniform of the national football team of the USSR was included on the list of 50 best football uniforms in history according to authoritative British magazine FourFourTwo. The publication put the uniform of Soviet footballers on the 33rd place. 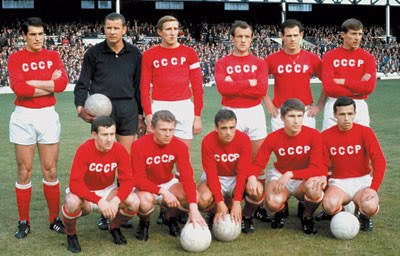 "The Soviet Union's big red machine trampled its way to the quarter-finals of Mexico '70, where they were eventually immobilised by Uruguay. But they did it looking menacingly sharp in this simplistic number, complemented by the all-black goalkeeper kit of Lev Yashin. Terrifying," the magazine wrote.

The first place in the ranking of FourFourTwo was awarded to bright-colored red and white uniform of the Danish national team from 1986. The second place belongs to the blue and yellow outfit of Argentinean club Boca Juniors from 1981, whereas the third - the traditional orange attire of the Netherlands football team from 1976.