Magnus Carlsen of Norway was very upset after he lost the match to Sergey Karjakin of Russia. The Norwegian lost to the Russian grandmaster in the 8th game of the match for the world chess crown. After the game, Carlsen refused to talk to journalists: he lost temper and walked out of the press conference. 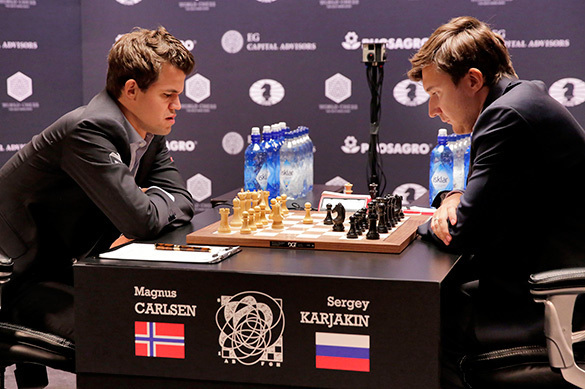 Seven parties of the game ended in a draw. The Russian eventually defeated the opponent playing black pieces. The final score was 4.5: 3.5 in favor of Karjakin.

After the game, journalists gathered for a traditional press conference. Carlsen came first and was waiting for Karjakin, who was being interviewed. The Norwegian chess player suddenly lost tempter and walked out of the press conference, TASS reports.

The Russian had to talk to reporters alone. Later, the manager of the Russian grandmaster, Kirill Zingalis, suggested that Sergey Karjakin  was psychologically stronger than his opponent from Norway. To crown it all, world champion Magnus Carlsen was not used to losing to someone.

Magnus Carlsen will have to pay the fine of ten percent of the prize money for his behavior. The prize fund of the tournament makes up about 1 million euros. The winner will receive 60 percent of the amount.

The Russian will have to either win or draw the remaining four games of the tournament in New York to take away the title of the world champion.

If Karjakin wins, he will become the first Russian world champion since 2007, as well as the 17th world champion. Both Carlsen and Karjakin are 26 years. Both Carlsen and Karjakin are the youngest grandmasters in the history of FIDE and in the history of chess. Both of them represent the so-called technical generation, when players get ready for games with the help of computer programs.