Battle in the Mountains held in Ingushetia 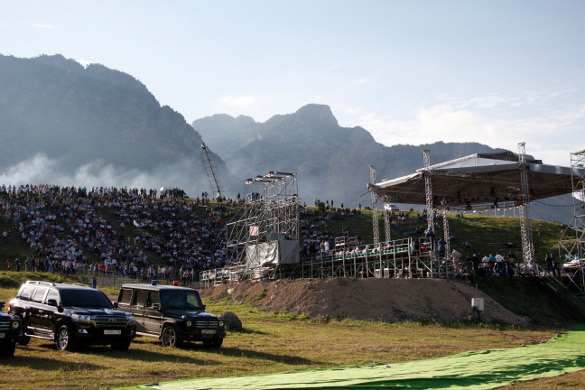 More than twenty fighters from ten countries of the world came to the cradle of the Ingush people. The competition was held between athletes from the USA, Brazil, Switzerland, Mexico, the Dominican Republic, Kazakhstan, Croatia, Estonia, Ukraine and Russia.

"We conducted the first three events of "The Battle in the Mountains" in another, also a very picturesque place, in the area of Egikal towers," the head of Ingushetia, Yunus-Bek Yevkurov said. "Then, we decided to hold it in this basin because this location is more comfortable in terms of landscape beauty, logistics and the wind rose. To mark the 20th anniversary of the republic in 2012, we had made a number of decisions to give a new life to our republic. This event was to boost the development of the tourist industry. We want to present Ingushetia as a safe and peaceful republic, where one can hold such large-scale events. We wanted to show the traditions and culture of our people and the beauty of our beloved country. I think that we have succeeded."

According to President of M-1 Global international company, Vadim Finkelstein, the idea to hold the competition in the mountains occurred to the head of Ingushetia, Yunus-Bek Yevkurov. "The effect from the idea has shown influence not only on Ingushetia, but also on the whole of the Caucasus", Vadim Finkelstein noted with pleasure.

Noteworthy, Mr. Finkelstein is being a little modest here as it was him, who mentioned open-air sports games in the canyons of Colorado in a conversation with the head of Ingushetia. Then the idea of similar sports competitions materialized in Ingushetia.

More than 20,000 people from eleven countries of the world gathered to see the open-air sports extravaganza in Ingushetia.

The Targinsky Basin is 1,400 meters above the sea level. An athlete needs to adapt himself to mountainous conditions of the region to perform successfully.

"Athletes say that they are not upset if they lose, because they very much enjoy breathing clean air, drinking crystal clear water, eating amazing local food and interacting with the local people - they enjoy the hospitality of Ingushetia," said Yunus-Bek Yevkurov.

"I liked everything - how everything was organized, the tournament itself, the atmosphere," the head of Karachay-Cherkessia, Rashid Temrezov said. "I think that this is a world-class tournament, which takes place on the territory of the North Caucasus District. I would like to congratulate my counterpart, Yunus-Bek Yevkurov, and all residents on such a wonderful tournament. For us, this is another good occasion to meet, talk to each other and share experience."

In conclusion, Yunus-Bek Yevkurov said: "Mixed martial arts used to be not very popular here, but now we have about 16 clubs. There are thousands of children, who now start training in youth clubs. Four years ago we did not have one single parachute jumper, but now we have them. Popularizing sport is very important. For example, we now hold a chess tournament among children. These sports give an opportunity to engage youths into something and attract more guests."

In the main fight, former M-1 Challenge heavyweight champion, Kenny Garner of the USA, after an unsuccessful attempt to take revenge in the battle against multiple world champion Sergei Kharitonov, lost to Denis Smoldarev of Estonia.