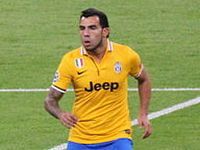 Segundo Tevez, the father of Argentina and Juventus striker Carlos Tevez, has been released after payment of a 50,000-USD ransom was paid to men who kidnapped him on the outskirts of Buenos Aires in Argentina.

Segundo Tevez, who raised Carlos (when his biological father died) was held captive by the men for eight hours after being kidnapped in Moron, some 30 kilometres west of Argentina's capital city.

A family spokesperson has declared to the press that Segundo Tevez is unharmed.