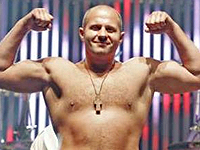 Mixed style wrestler Alexander Emelianenko was put on the federal wanted list on suspicion of rape. The athlete did not arrive at the scheduled time for questioning. As reported by the Investigative Committee of Russia, Emelianenko may serve as a defendant on the rape case.

Meanwhile, Emelianenko's lawyer, Kahaber Dolbadze, said that law enforcement authorities did not notify him of the fact that his client had been put on the federal wanted list. "I know nothing about it. I know that the case has been filed, but I can not specify the article, we have not seen the resolution," he said.

The wrestler is suspected of raping the woman, whom the wrestler hired to clean his apartment. The athlete also stole her passport. This is not the first incident, when the athlete breaks the law. In March 2013, Emelianenko was sentenced to a fine for a brawl aboard a Moscow-Barnaul flight. In August, a 23-year-old graduate of the University of Siberia sued him for rape. Emelianenko himself claimed that the woman provided him sexual services for money.  Later, she recalled the complaint. In addition, in October 2013, the athlete beat a pensioner in a Moscow cafe, but the case was closed due to reconciliation of the parties.