Plushenko says he was forced to go to Sochi

Russian figure skater, two-time Olympic champion Yevgeny Plushenko, stated that the Federation of figure skating actually forced him to perform at the single program at the Sochi Olympics. The champion himself confirmed that he advised sports officials should replace him with another skater.

Plushenko did not conceal that he wanted to win in individual skating. Russia sent only one competitor in this discipline to the competitions in Sochi as others did not make it in the top three winners of the world skating championships. 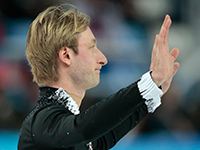 Plushenko withdrew from the Games prior to the competition in men's figure skating in Sochi due to an injury that he suffered during training. After the Vancouver Olympics, the athlete received a serious surgery, and many doubted that he would be able to perform at the Sochi Games.

As a possible replacement of the famous skater, a champion of Russia Maxim Kovtun and a European silver medalist Sergei Voronov were considered, but it was Plushenko, whom the Federation of Figure Skating sent to Sochi. Plushenko was certain he could handle the tournament.

His refusal to compete in the individual program caused vivid reactions in the Russian society. In particular, his fans were worried about the prospect of the skater's farewell tour. Plushenko has already canceled his performance in Vladivostok, having said that he would go there in September. Tour dates in other cities have not been reported.