Russian Prime Minister Dmitry Medvedev congratulated Yelena Isinbayeva on her yet another victory at the World Athletic Championship in Moscow. Isinbayeva proved yesterday, on August 13, that she was the best in the world in pole vaulting. 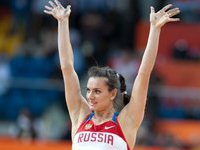 "My congratulations to Yelena Isinbayeva on her emotional and well-deserved victory at the World Athletics Championships in Moscow. I wish Yelena new achievements - in sports and in personal life," the Prime Minister wrote on his Facebook page.

After the victory, Elena said that she would take a break in her career for the sake of becoming a mother. She did not rule out that she would return to sport for the Olympics in Rio de Janeiro in 2016.