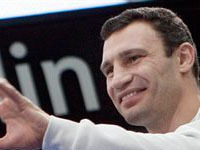 WBC champion Vitali Klitschko of Ukraine will not appear on the ring before the end of the current year. The boxer suffered an injury of his right hand. The last time, when the boxer appeared on the ring in September 2012 in Moscow, when he knocked out Manuel Charr.

The next fight to confirm the championship title will take place with the participation of Bermane Stiverne of Canada, who had scored 23 victories. The Klitschko-Stiverne fight had been postponed three times. Now it will be had as early as 2014.

Klitschko also said he was going to continue his activities in the political life of Ukraine. He intends to run for president of Ukraine in 2015.